The setup process is largely automated, however Cocoapods is needed to install the Monetizr iOS SDK and its dependencies into the exported Unity project. If you do not have Cocoapods installed, here's how you can do it.

In the Monetizr settings window (Window > Monetizr Settings) enable iOS native plugin. When enabled, depending on your Unity version, additional options may appear. 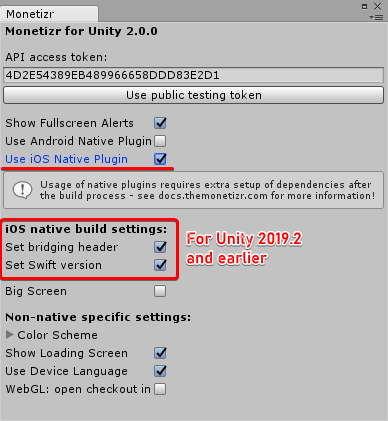 Typically it should be OK to enable both iOS build settings. These options will preconfigure some required settings for the exported project, and are provided as toggles in case of conflict with other plugins.

First, export your project as normal. In the root of your build folder (where the Unity-iPhone.xcodeproj file resides), create a new file called Podfile.

Contents of Podfile for Unity 2019.2 or earlier

Contents of Podfile for Unity 2019.3 or later

With the Podfile in place, open a Terminal at the project location and run pod install. This will install the Monetizr iOS SDK and its dependencies into the project. Additionally, an xcworkspace file will be created.

By this point, the project should be good to go! Open the newly created xcworkspace and build the project as normal!

Did this page help you?